What I learnt whilst wearing welly’s #Glastonbury2016 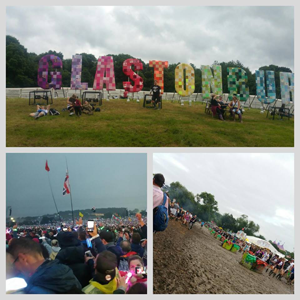 Imagine being invited to the world’s largest festival to perform on the Theatre and Circus fields with Liverpool School of Cantonese Kung Fu. Well I was… I’ve know the owner of LSoCKFu (James Roach) for the last 20 years and have performed in these fields twice before with him and others. However, that was over 8 years ago. This year I was invited again to be part of the crew.

We left the Monday morning before the start of the festival so we could have some time to ourselves before the public came in to rest and chill out. We camped in the performer’s area next to the 9 foot fence, watching other performer’s arrive during different times of the day over the next few days. Putting their tents up and practising their routines,  juggling, singing, playing kazoo’s, being clowns, orchestrating massive puppets (from giraffes to seagulls) and becoming robots to name but a few sights that were seen.

A number of us caught up over camp fires and walks though the fields, up to the big sign and over to see the dragon. Watch stand holders set up, stages and displays being built and public dribbling in from the car parks carrying pot noodles and cider in wheel barrows and prams for the week ahead. The mud at this point was at its lowest but that was soon to change.

If you have never been I would highly recommend going! It is something out of this world…

Glastonbury, once up and running is a small town with 180 thousand people with welly’s, cagoules, face paints, beer and all they’re looking for is a good time.

This was my 5th adventure in Glastonbury (3rd time as a Performer) and there were a number of things I noticed during my week there.

The mini bus arrived on Monday afternoon and our tents had already been put up by a couple of people who headed off 4 hours before we did. But when we got there, there were already so many people building, camping and setting up home for the week.

Traffic cones lining the small roads, police and volunteers guiding people to the right gates and it was 4 days BEFORE the public were due to arrive. To get this festival together a monumental amount of communication needs to happen between thousands of people ensuring everyone has the same agenda, in the places they need to be, doing the jobs they were hired to do.

Which made me think, what communication levels do you have in your business? Does EVERYONE know what is happening, what they need to be doing, when they need to have it done by and who to speak to if things don’t go according to plan?

Miracles and magic happen outside your comfort zone! By Sunday I had completely and utterly had enough of the mud. It was warm but you needed rubber shoes to keep you from getting covered in thick mud, which meant your feet and ankles started sweating. It was hard walking in the mud to various different fields and areas. It was like walking with weights around your ankles. It wasn’t comfortable in the slightest so imaging carrying a Chinese dragon and lions in it and doing 3 shows a day.

What opportunities are you missing because you are not in your comfort zone, or Are you a perfectionist and waiting till everything is puurrrfect? Richard Brandon says – Say yes and work out how later!

To be fair it would be very difficult NOT to have fun in Glastonbury because of the amount of weird and wonderful things you get to see, hear, touch and taste that you wouldn’t usually experience anywhere else.

Most people in Glastonbury were having amazing conversations, seeing and listening to things they’d not seen or heard before, laughing,  joking, smiling and looking forward to what they were going to see next.

Are you having fun in your business because if you are not, it’s probably not the place for you! How could you have more fun or what are you doing that you could give someone else you are having fun and enjoying what you do. People buy from people who are passionate and excited about their business NOT from people who are board or grumpy with what they do.

You couldn’t help BUT try something new whether it be food, drink, listening to a band or a comedian, walking to the healing fields and getting a massage, watching a band you wouldn’t normally go to see.

The key to leaving Glastonbury was to get up and out EARLY! And your early is never earlier than someone else’s early. I went down with the minibus but was going back in a car. Pete and I left Monday morning at 7am to walk back to the car which took 52 minutes. After trudging through mud, up and down hills, through cattle grids and gates. Maybe travelling an additional mile because some parts were blocked off.

We got the car, in a muddy field with hundreds of cars and wellingtons left in the muddy grass. People were not taking the welly’s home, they were just leaving them were they stood to get into the car. Wellington boots scattered everywhere and left to probably be picked up by the volunteers to be washed and resold for next year’s adventures.

What is it that you ultimately want out of your business? It may not be something for right now but we all need a plan, a goal something to strive for… What is your exit plan? Have you got one? If not, do you need to think about working on something?

The week was amazing. I met new people from the Kung Fu School and made some new friends. Old faces were just fabulous to catch up with, as if we had never been apart and most importantly we did have fun.