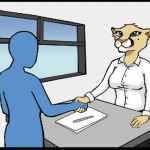 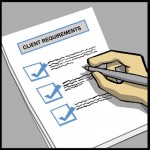 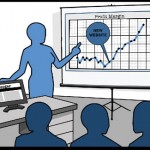 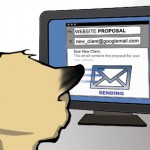 I made some alterations “emailing the proposal” frame. I removed the toolbars, which allowed the viewer focus strictly on the email the window. In “the presentation” frame the line work is relatively simple so I was able to use the “stroke tool” in Photoshop. The stroke tool creates outlines around shapes, which really helps my work-flow as I do not have to spend large amounts of time manually selecting the areas to fill.

I continued working on the comic strip again today. I digitized the “client requirements” frame, which depicts Miss Koogar going over a checklist of a client’s website requirements.

I also updated some of the previous comic-strip frames, tweaking the images here and there. Limiting the colour scheme, giving the frames a more uniformed appearance. A lot of the frames still needed the tonal work and shadows adding. Once you add the shadow to an image it always gives it more life. The computer screen in the “emailing the proposal” frame was angled little to harshly so created a new image of the  computer screen at much more gentle angle.

I have used a number of different camera angles in the comic strip which are beginning to emerge. This variety makes the storyboard more visually interesting and helps to engage the viewer.

I’m really pleased with the way work is going right now, the Comic Stip project is coming along well!