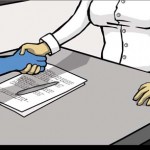 I  digitised frame A which displays Miss Koogar discussing proposal with a client. I tried to recycle as much as artwork as is possible without impairing the quality of the image. This adds to consistency and improves work-flow. Much of the recycled components have to been altered drastically but still save time in the long run.

The eyes, there so many layers within such a small space. They had to be redirected towards the clients. Adjusting  the eyes is really what took the most time in this frame. There is much more to do than just moving them from their original position. All of the opacity’s have to set to the correct levels and the scale and the shape have to be accounted for also.

I’ve been  making embellishments  to the existing frames and tweaking them here and there. Such as adding steam above a mug of tea, I put suggested text on the sheets of paper, I increased the weight of line on smaller objects. Some of the adjustments. I added another client who has been dark into frame A gave her/him a navy blue tone to distinguish the two clients.I changed the colour of the text in frame I from a navy blue to light blue to improve the overall uniformity  of the colour scheme.

I began digitsing frame F (the final frame of the comic strip), which shows Miss Koogar placing a package into an old fashioned postbox. I have been experimenting with different colours of the postbox as the traditional postbox red doesn’t existing within the Koogar palette. Currently it’s  set at medium purple and is looking good.