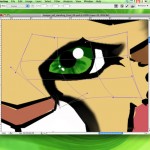 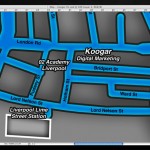 Today I added the finishing touches to the latest image of Koogar. As usual I started off the day by writing a new task list and viewing plans from the previous work day for the day before I beginning practical work.

One of the most distinctive features that I added was the black markings around Koogar’s eyes and muzzle. I recycled imagery from an older image of Koogar. They markings did not fit straight away. They needed quite a lot of adjustments, resizing and rotating as well as some clipping here and there. The important adjusment I made to the markings was with a tool called ‘mesh warp’. Mesh warp is a powerful tool, it allowed me  to stretch and compress the layer into a shape bespoke to the image of Koogar.

Another alteration I made to the image was lengthening Koogar’s legs, giving her greater height and emphasizing her upright position differing from previous images of Koogar. I added the dark tones to the shirt and the trousers using old images of Koogar as a reference, to keep her looking stylistically consistent. And last but not least I added Koogar’s tail to complete the image.

After finishing the latest image of Koogar. I continued digitizing the map. I gave all of the streets a 16pt stroke to lift them off the page and increase contrast. Utilizing the layer effects I added a cyan Inner glow to the roads, which to make the map a little more visually interesting. Moving further away from that plain monotonous look that most maps have.

I placed circular frame over the map, which blocked of extraneous information so as the viewer could focus the important features displayed in the map. The frame also contributes towards the aesthetic style of the map.