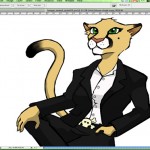 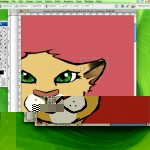 I started the day off by writing a new task list. Detailing what had to be done over the course of the day. I added the notes I made from Day 4 to the task list. To avoid any issues being overlooked.

Another feature which I copied and pasted was the dark shading within her ears which adds the depth and the shape. Both of these features took a while to make the first time round and needed a lot of feathering out. I managed to side step most of that work by recycling what I have already produced. I had to make quite a lot of alterations to the layers that were copied and pasted but this still saved valuable time and most importantly made sure the features in both were matching and succinct throughout. The standing image of Koogar is now just shy of completion needing only the shadow layers added and a little touching up here and there.

Today I gave Koogar a suit jacket on seated position. I had sketched a couple of drawings of Koogar in a seated position. Using a light box I sketched the suit jacket over the top of an older  drawing of Koogar sitting down. Creating new images this way leaves you with very similar and more accurate drawings. I had scanned all of these sketches in so I imported the one with her wearing the jacket  into a Photoshop image of Koogar. I then digitized the jacket using the drawing as a reference. Having a reference can make life a lot easier and increase your work flow.

I gathered some more reference material for the Koogar twitter bird, which is half cat, half  bird. I searched for some mythical creatures such as griffins  and  some other fantasy creatures. I then drew up a  sketches based on the new reference material I had collected.

I also drew up a couple of sketches of maps and well known landmarks in close proximity to the Koogar offices. I added some arrows pointing to the location of some well known landmarks which are not visible on the map itself. This is to give the viewer a better sense of  their orientation when using the map. These maps are being created for potential clients to help them find their way to the Koogar offices.