Did you invest in Tights or Online Marketing? #theapprentice 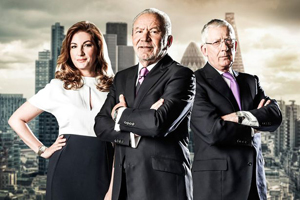 OK, so after the 6th person asked me if I had seen “The Apprentice” I just had to watch it.

Lots of people had been talking about it and most of you may know I don’t watch TV so I had to fire up BBC iPlayer to find the 2014 Finale of The Apprentice to watch Mark E Wright (24) and Bianca Miller (25) battle it out to become Lord Alan Sugars’ 1st business partner.

*I will admit, I didn’t watch all episodes, just the final with Mark and Bianca.

During an annual catch up with a group of friends a 7th person asked me if I had watched The Apprentice and sat back as I gave my opinion of the final episode, knowing that she would have sparked something in me.

The conversation started… “I have been doing this for 8 years as Koogar (15 years in total) and I’m wondering why is now the right time for Lord Sugar to be investing money into this type of business?”

Is it because he didn’t feel the tights were a good option? Or has he suddenly realised the “Internet thing” is catching on?

Bianca’s idea for “True Skin” was a great one and being from ethnic minority myself I have worn “tan” tights to work (which were a VERY milky tea colour / white), so I could relate to this issue and that others darker than me would most certainly have. However to ask for £20-£35 a pair they would REALLY need to be special tights.

Bianca was going for the higher quality client which is fine if you have a brand that matches their expectations, not a brand that could be seen to be equal to a cheap brand on the high street that does not portray the value of the garment inside the packaging.

Remember the 3-5 second rule. We all make a decision rather quickly and if we see a price range and a product or service that is not congruent with each other, we will leave it to one side for someone else. Understanding the people you’d like to sell to is key, I would argue the most important thing when it comes to marketing and pitching your idea to an audience.

Branding is about setting the levels and expectations for your audience and also working out how much THEY value your product or service. It not just about giving them something you think they need, which most certainly helps but it’s the EXTRA little things that people remember.

I do appreciate Bianca only had one focus group and not a lot of time to create the brand and packaging. Displayed in the right way and in the right place I would certainly buy a pair.

Climb.media  – A brain storming suggestion for the company.

What a great domain name for a company… said in a slightly different way could bring out lots of different connotations…. This did make me chuckle!

My 1st impression of Mark wasn’t much at all in all honesty, he didn’t look passionate about anything during the session and even when he said he was stressed he just looked laid back and not really bothered, although as individuals we display these feelings in many different ways. His knowledge of the industry came across as basic / old to an extent and he wasn’t doing anything new, which Lord Alan noted in the boardroom so I’m not sure what was so special?

The saying “getting people to the top of the Search Engines” is a vague and overused term which a lot of business owners have heard, maybe tried before (with one of the telesales companies calling them and pushing them into a contract they might not be able to get out of) and have also realised that it is not possible unless you put a decent budget behind it and not just a couple of hundred pounds over a few months. Search Engine Optimisation (S.E.O) is a long game and you need a strategy to go with it. Having all the right marketing elements (on and offline) to back up your online presence is essential. That said this is an issue that most business owners and marketing managers want to conquer and it is up to us (as Digital Marketeers) to educate our clients, set their expectations and show them there is another way without using outdated lingo.

Mark set the starting budget of £400 for businesses he wanted to work with, which is a good place to start as you are qualifying your lead right from the outset. However, you have to back it up with some actual wins you have delivered to your clients. He was obviously going for the business that has that budget to spend but the video for me didn’t display it well with a builder and various other business owners hanging off a climbing frame. If you are going for a bigger business you have to been seen to be equal to them.

His business model was a sound, by taking people on as the company grew ensuring each person is sustainable by either coding or selling. Again, I understand that Mark had a tight time frame to deliver his pitch in and think with some tweaking he could do well!

Congratulations for Mark and Bianca for being in the final of The Apprentice 2014 as it was no mean feat. Koogar have started following Mark Wright on twitter and we wish him the best of luck with his new venture. He sure has the capital to start him off well!

What did you think of the finale? Did you think the right person won? I’d love to hear your opinion…