Why marketeers should care about Pokémon Go 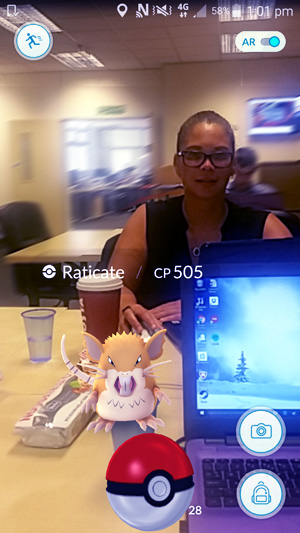 Pokémon Go is the latest version of the Pokémon franchise, one of the most successful gaming franchises ever produced. While Pokémon has always been hugely successful the introduction of Pokémon Go appears to have taken it to a new level of popularity, as almost everywhere you go all you see is people of all ages playing.

Pokémon Go encapsulates the classic Pokémon activities of hunting and training Pokémon, but it integrates this with the real world. This combination makes it an augmented reality game, meaning that the players must travel to real word locations to battle at gyms and must search the real world to find and catch Pokémon.

The uniqueness of the augmented reality game, and that it can be freely downloaded from the iOS and play stores has led to an unprecedented number of downloaded since it was launched just a few weeks ago.

Reports have suggests that it has been downloaded by over 75 million users worldwide, which is the equivalent of the entire population of Turkey.

It has also won a number of awards including the most downloads on the app store in a launch week ever. This huge popularity caused Nintendo’s share price to increase by 86% in a week, leading to an increase in their overall value of £15 billion, while since then it has dropped over revelations the Nintendo do not fully own Pokémon go, it is still up over 60% on the pre-launch price.

Why is the entire world fascinated with Pokémon Go

While the rise of Pokémon Go is an intriguing topic which has the entire world fascinated, you might be wondering what it has to do with marketing.

Well…I first recognised the opportunity it may present to certain businesses when I realised that across Liverpool a number of the poke stops (locations where users collect items) were actually pubs, such as the Philharmonic Dining Rooms on Hope Street, the Fly in the Loaf on Hardman Street and the Pilgrim on Pilgrim Street. While poke stops may attract some users to these locations, it is actually another feature of Pokémon Go that will truly attract avid uses to these pubs for an extended amount of time. That is lures, these are an option which can be added to poke stops that attract Pokémon to that location for 30 minutes, many keen Pokémon Go fans will locate the lures across the city and will congregate there to catch Pokémon. As many lures are often placed in the same locations throughout the day, large amounts of people often congregate on these hot-spots.

Therefore, for these pubs it should be seen as a great opportunity for them to lure potential customers into their pubs where they can enjoy the atmosphere, purchase food and drink and catch Pokémon to their heart’s content. While this might seem slightly farfetched, both McDonalds and Starbucks are being linked with purchasing poke stops for their range of cafes and restaurants. Although this option is not available at the moment, and Pokémon go are currently replying on in-app purchases, it is rumoured to be very close to being introduce.

While this cannot be confirmed yet, it just shows how much of an opportunity they believe Pokémon Go could be for their restaurants. Research has also been carried out on current Pokémon Go users to discover their views in relation to the possibility of sponsored content on Pokémon Go.

The results were overwhelmingly positive with users stating they would happy engage in a range of different sponsorship options.

These include poke coins being available when users make shopping purchases, unique game items that can only be accessed at specific shops or restaurants or even special rare Pokémon unlocked if you spend a certain amount in certain shops.

Thus, while it is key to consider a company’s brand image when associating pubs and restaurants with games of this type, it could be a great opportunity for some smaller scale businesses who are located on or close to poke stops. 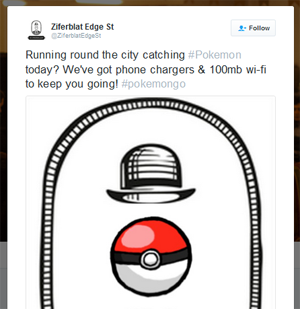 This further highlights the wide range of possible ways in which both small scale and larger companies can effectively benefit from the Pokémon Go phenomena.

Overall it is one of those crazes that seems to have captured everyone’s attention, no-one knows how long it will last but it could be a great opportunity for businesses who are willing to engage with customers at a different level.