How Snapchat has become key for businesses 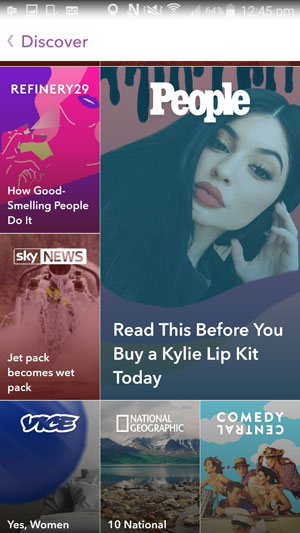 Over the last 4 years since Snapchat was launched, it has quickly become a global success with over 100 million global active users. Snapchat now has a range of different functions, but it was and still is essentially a temporary photo sharing application. A way of showing your friends, or your fans a snapshot of your life, but for a very short-lived period of time. As Snapchat has developed and introduced a range of new features it has become more and more important for businesses and business people to understand and engage with.

The first major addition was the story function, this is the option to write a story of your day, through a number of Snapchats that will show anyone who follows you what you have been doing. This is really important for many businesses and celebrities, as it is an extremely powerful tool to increase engagement with the brand.

As many people will watch the stories on their Snapchat every day, therefore if a brand or celebrity can get people to follow their account and share interesting and engaging content on their Snapchat story then they can effectively interact with their consumers on a daily basis.

This is especially important for many celebrities, as they use this as a way of building a more intimate relationship with their fans, as they can show them ‘behind the scenes’ views of their daily life, their family, their friends, their workplace and their home.

Another recent development, which many large corporations have invested in is the news section of the application. In the discover section of the app, there are now 18 different news providing companies, who create a daily mix of videos and photos to educate the users on their latest news. These companies are extremely diverse and are seen as leaders in their specific fields, ranging for Buzzfeed, to Cosmopolitan, to Sky Sports and National Geographic.

This section of the app is key for these businesses as it increases their awareness hugely, as again they can engage with their consumers on a daily basis.

It can also increase consumer engagement with the company, and the website, as many of the videos link to articles from their websites, which can then be accessed through the application. It is also interesting to note, that many of the companies within the discover section have a large interest in the younger generations, and therefore this could be seen as an effective tool for targeting them, due to the demographics of the Snapchat users.

Snapchat events can also provide amazing expose for businesses, as this feature allows Snapchat users at events to take pictures and videos and post them to Snapchat. Snapchat will then cut the most appropriate pictures and videos together to develop a clear story of the way in which the event played out. This has been done for a range of sporting events such as the Super bowl and a number of Premier League football matches.

These event posts are an amazing opportunity for the sports teams involved, as it increases the reach of their brand.

But more importantly, it provides a ‘fans view’ showing others the true atmosphere and energy inside the stadium at these specific events.

Finally, the most recent addition to Snapchat which a number of large corporation have engaged with is the Snapchat filters. These are a range of filters which are added to the users face and change their appearance in one way or another, some distort the user’s face, while others add humorous images to it such as dog ears or a raccoon’s face. While the majority of Snapchat filters are just largely humorous, there have a been a number of sponsored filters over the last 6 months or so, where companies have paid Snapchat to have a specific filter added to users options.

Largely these have been done to increase the buzz around a new launch or as part of a marketing communications plan for a new campaign.

For example, Ariana Grande sponsored a filter to create buzz around her new album launch, it allowed users to look like her with the filter. Cadburys have also had two filters, one to remind consumers that crème eggs were now available and the other to aid the launch of their new ‘obey your mouth’ campaign. Additionally, to increase the attention around the release of Batman vs Superman DC comics sponsored a filter which allowed users to look like Batman and Superman.

Overall, while Snapchat started as a very simple idea of sharing images, which could only be seen for a very short amount of time. There are a now a range of different ways in which businesses can utilize Snapchat to increase their awareness, engagement and connection with their consumers.