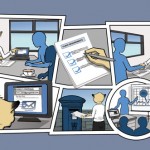 Today I drew MissKoogar in new positions some new hands positions pointing in various directions for use on the web site. I finished the final frame of the comic strip project on the Friday all I will have to do is assemble the frames together

Today I have finished the comic strip. It feels good to see all six frames together on the same page.  I utilized unusual shapes to form the borders to give the strip more momentum. The original square/ rectangular shape of the frames did not the fit I had to trim them down  and add a little more to the images here and there. Where the borders interfered with key objects I placed copies of these objects above the border.

This is my final blog post. Thanks to those  of  you who has been following! 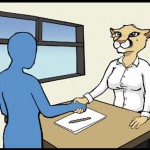 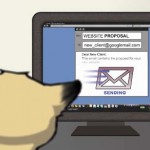 Today I was pleased  to complete the last stages of the images were Miss Koogar is modelling the new company t-shirt. I added a few extra folds into the t-shirt to express the heavy fabric in the images. The dark tones were added to the t-shirts, which gave Miss Koogar her full figure back and emphasized the direction that the body faces in each pose. After that, I made the final adjustments to Koogar; firming up the line and checked her top to tail for any flaws and inconsistencies.

I used the remainder of the day to begin working on the new comic strip project. I gathered a large amount of refernce material for the new project and drafted out a few ideas on paper.

Today I continued working on the comic strip project, doing it the old-fashioned way with a pad and pencil. I drew a collection of frames for comic strip that depicted scenes involving the interactions between Koogar and their clients. I styled this initial group of frames to be nondescript and minimal for functional purposes. The images in the comic strip strictly  focus on the actions and gestures made by the characters, hence the minimal detailing. As the Koogar comic strip project progresses more groups frames will be produced which may be significantly more detailed. 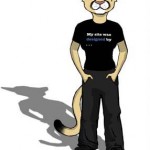 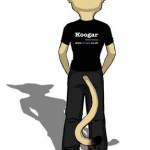 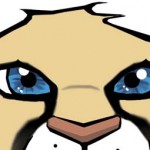 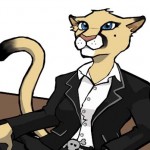 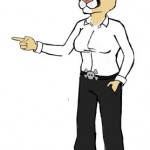 I created the Koogar twitter bird and gave it a round, bulbous form with a large head to make it look cute. I completed the image to the bird today, the Miss Koogar images took a lot longer to design, produce and render, so I was pleased to have this done. I worked a quite a lot on colour matching especially on the various layers I had imported from previous images, finding equivalent tones which gel together.

It was decided that Koogar’s eyes needed to change from green to blue I colour matched the eye layers and adjust the Hue/Saturation levels accordingly. Blue eyes are better suited to the Koogar brand. Amanda thought the blue eyes were  looking a little too much of a dark shade so I softened the colours and the contrast to make the eyes appear brighter.

I created another image of Koogar  in a new pose this week. She is standing at a forty-five degree angle and pointing to her right. She still needs the dark tones and shading added but the image is coming along nicely. I have taken a couple of parts from previous images of Koogar which are different sizes, so this new image needed to have a lot of thew pieces resized. The image will prove useful when the Miss Koogar character is acting as a guide on the web site, directing viewers where to go and what to do.

Thanks for reading, Matt.