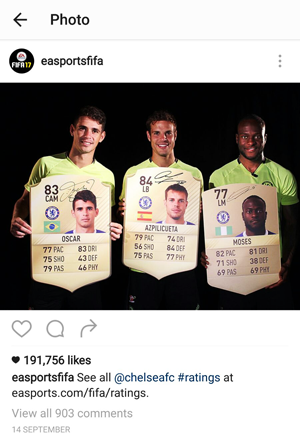 How does Fifa get us every year? 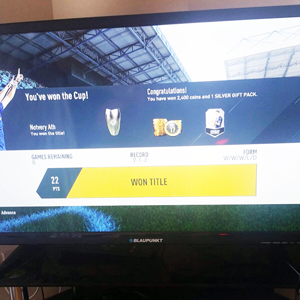 So, it’s that time of year again and no, I don’t mean autumn. The latest installment of the FIFA computer game series launched last week, FIFA 17. Each and every year they release a new version of the game whereby football fans across the country control their favourite players, and defeat their friends and family members. But, a new version has been released every year since 1993…so how do FIFA create such a buzz around the launch every year?

With this in mind, the large majority of their marketing budget is spent on digital marketing communications, such as social media and digital advertising.

One very smart example of this that the week before FIFA 17 launched there were a number of advertisements across my social media accounts, specifically Facebook and Snapchat. These advertisement were also responsive and enabled the user to click it and if they wished to actually purchase/pre-order the game. Alongside the digital advertisements there was also a television advert which depicted the most novel part of FIFA 17, the ‘journey’ element. These different forms of advertising worked effectively to increase awareness of the launch, but also to create a level of buzz around the newest features.

Secondly, one of the most important ways in which they increased the excitement around the launch of FIFA 17, was through the use of influencers. Obviously, for young football lovers there is no better influencer than actual professional footballers and therefore they use their contacts with footballers to help promote the game and the launch in a number of ways. Firstly, about a month before the game is launched the player ratings were released, outlining the level of ability each player will have on the game.

This was used as a key stepping stone to increase buzz around the game through printing some of the player’s cards (see below), getting them to hold them & to be photographed with them. 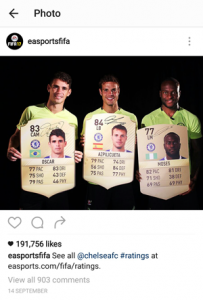 These images were then shared across both the FIFA social media and the player’s social media. This is a simple way of influencing consumers through attaching the brand to specific well known influencers. Similarly, closer to the launch many influencers including football players  and music artists ranging from Tinie Tempah to Alex Iwobi, post images and videos across their social media channels showing them actually playing the game. This again increases the buzz, gets people really excited about the launch, and shows them some of the changes to the game, resulting in people purchasing the game.

Another key way in which they facilitated the anticipation this year, which they have never done before, is through co-creation. This is where the brand interact with their consumers to create a product in which the customers have been involved in the decision making.

This was done this year in relation to the FIFA 17 cover, as they undertook a social media poll whereby fans could vote for the player they wanted to be on the cover.

Ultimately, the German midfielder Marco Reus won, but the importance of this process was they engaged with their consumers long before the game was launched, getting people to begin thinking about the new game and generating that engagement and attachment to the game way before it has launched.

Finally, they actually organised a UK launch for FIFA 17, whereby a number of lucky guest could attend an event at the Olympic Stadium/ London Stadium. A number of famous influencers were invited including Nathanial Clyne, Marcus Rashford and Olly Murs.

At the event fans were invited to play the new game, take photos with the premier league trophy and even create their own FIFA FUT card printed with their picture and statistics, as if they were an actual footballer.

This again increased the anticipation for the game and added credibility to the excitement through the inclusion of a number of famous influencers.

Overall, FIFA truly understand the audience that they are trying to attract and therefore the best ways in which they can engage and influence them. This enables them to create a slightly altered product every single year and still convince almost every young football fan across the UK to part with £40. They market their product extremely well and reap the rewards.